I’ve been neglecting my cognitive tools.  Admittedly, they don’t need the shot of WD-40 that I use on the garden clippers.  But I’m not taking care of the tools I rely on every day.

My grandfather would disapprove.  He was a craftsman with serious technology (locomotives) and practical technique (carpentry).

I’m sure Jack D (as everyone called him) had plenty of tools, but probably not too many. He’d consider the likely benefit against the cost. His skill meant he could achieve superior results with adequate means.

As for the tools he did have, he had them ready to use.  Blades were honed, sawdust was cleared, dirt was wiped away.  Pegs, racks, drawers, tins were chosen and rearranged to support effective use.

Earlier today, I came across a colleague’s question related to RSS feeds.  To help answer his question, I opened my (often neglected) NetVibes feed reader.  And it’s a mess.

Messy in part because it’s easy to add feeds, so I’ve added lots.  I don’t always step back and thing about what value I get from a particular feed, though. 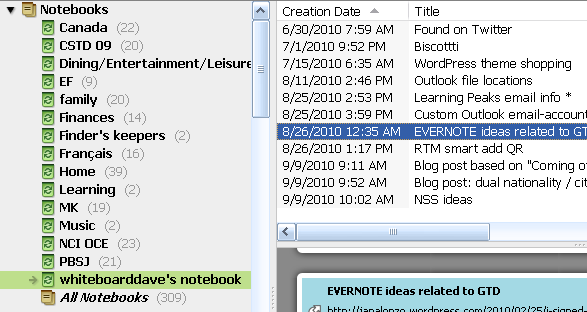 I see this tendency to collect things without much reflection in my Delicious tags (513 of them) as well.  And in my Evernote notebooks.

Adding is just collecting.  Grouping is a potentially helpful advance.  It take more time to pause and consider what you’ve got, what you get, what you think about that, and what you want to do differently.

Which reinforced the need for (and the value of) organizing what I’ve got.

If I charged for these posts, I’d call it curating, one of those highfalutin words I enjoy satirizing, like  affordances.

The concept is apt, though; the medieval Latin word curator, related to “care,” meant an overseer, manager, or guardian.  I can’t resist adding that in the Middle Ages, according to the Online Etymology Dictionary, this meant the care of “minors, lunatics, etc.”

Care is much more than amassing.  In fact, care sometimes includes pruning: cutting back and discarding things that aren’t useful, things that can even impede productive growth.  “Productive,” naturally, is up to you and the results you have in mind.

Or, up to me.  So I’ve got some chunkifying to do.  It’s not always copy and paste, you know.  Sometimes select and delete has a big payoff as well.  If you’re going to keep the saw, then make sure it’s sharp.  But every so often, ask if that’s a saw worth the keeping.

2 thoughts on “Pruning as curation, or, only keep saws you want to sharpen”