“What we know determines what we see, and not the other way around.”  That’s how van Merrienboër and Kirschner start Step 6 (analyze mental models) in Ten Steps to Complex Learning. Two people hiking the mountains in France, they suggest, see different places: the geologist sees rock formations; the cyclist sees gear ratios.

As the diagram shows, Step 6 fits with other elements that make up the supportive information component of the Ten Steps model.

From a learning perspective, supportive information underpins those skills that you apply differently in different situations.

This chapter of the book parallels the previous one:

A mental model is a description of how the world of some domain is organized.  You often hear “mental map” as a synonym, because a map shows layout and relationships.

You can find mental models in documents; you can also develop them by talking with expert performers who can describe the models they use as they work.

vM&K suggest that such discussions start with simpler classes of tasks and work up to more complex ones.  At the same time, they lean away from the common belief that the more you know about a domain, the better able you are to solve problems in it.

In a sense, everything is related to everything, and thus the analyst can build seemingly endless networks of interrelated pieces of knowledge.  Therefore, new relationships must not be added if a competent task performer cannot clearly explain why newly associated facts or concepts improve her or his performance.

Conceptual models explain a domain by various features.  You can classify computers by their processors, or by their age, or by manufacturer, or by color (though most of the time, color’s not a particularly helpful organizer).

A hierarchical model like a taxonomy isn’t the only possible conceptual model.  Concept maps and semantic networks also show relationships; the latter is more carefully definite with explicit labels for relationships, as in the example on the left (from Wikipedia).

These relationships are fairly obvious, but vM&K offer some other types of relationships that would be useful in analyzing and in teaching mental models.

For example, experiential relationships connect a concept to a familiar, concrete example: the alternator on a car is like a generator (the device that cars used before alternators).  Similarly, analogical relationships aid understanding by comparing a new concept to one that’s familiar although outside the domain in question–for example, the theme used by a WordPress blog is like a set of clothes: changing the theme changes the appearance of the blog, but not the content (the posts).

Other types of relationships:

Another major type of mental model is the structural model, which explains how elements of the model, related by time or space, fit together.  For example, the life-stages of an organism are a time-based mental model.  vM&K mention the location-in-space models of chess experts, who are able to grasp the relationships of chess pieces. 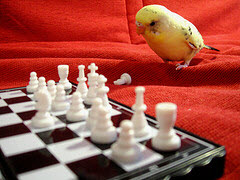 I’ve read elsewhere that when chess pieces are arrayed randomly, expert players aren’t any better able than novices to remember the positions, probably because the relationships seem arbitrary to the experts.

Often there are interrelated sets of structural models–this is complex learning we’re talking about.  You can think of these as the 50,000-foot version, the 20,000-foot version, the treetop version, and so on, as the focus becomes more and more specific.  I could have a model for writing a nonfiction book; within that, a model for a typical chapter; within that, models for constructing sections, paragraphs, and even sentences.

Causal models concentrate on cause-and-effect or natural processes.  They form principles that allow learners to explain how something works, or why it isn’t working.

Molecular biologist Bonnie Bessler and her colleagues discovered a form of communication in bacteria that helps explain how single-cell organisms as a group can engage in behavior beyond their individual capabilities.  You can hear her describe this quorum-sensing model in a February 2009 TED talk.

vM&K acknowledge that it may be helpful to focus on only one type of model at first, depending on the nature of the domain.  For example, areas like mechanical engineering, architecture, and instructional design are heavily analytic, and so structural models make a good starting place.

Intuition: not necessarily a good thing 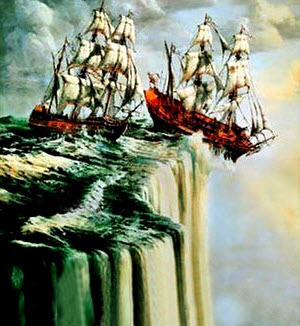 As in Step 5  (analyze cognitive strategies), newcomers to a field often bring with them their own mental models.  These “intuitive or naive mental models are often fragmented, inexact, and incomplete,” vM&K argue.  Novices are usually unaware of the underlying relationships between elements, and frequently carry unexamined misconceptions.

One example is the notion that the internet is a centralized system, with all computers eventually connected to some vast, central server.   This hierarchical model is easy to imagine, but gets in the way of someone trying to understand how the internet actually works.

A favorite example of mine is the Microsoft Word document template; another is the cascading style sheet.  Both are used to control appearance and layout, either of a Word document or a web page.  The underlying concept, not always grasped by newcomers, is that there is no necessary relationship between the text on a page and the appearance of that text (size, color, alignment, etc.).

To the newcomer, a document is a document.  Only when that naive model is extended does the newcomer understand that the width, spacing, font, height, weight, and so on can be controlled without any regard to the actual words.

As with cognitive strategies, the designer develops mental models only if there aren’t pre-existing ones.  With models in hand, the developer is able to carry out essential design tasks.

For example, a progression of mental models helps to refine the task classes that are a central component of the Ten Steps.  The simplest domain model enables learners to perform the simplest class of learning tasks.

vM&K give a three-level progression for electronics troubleshooting as an example of this relationship between models and task classes:

Because mental models are supportive information, you can present them explicitly to the learner (e.g., to introduce or explain the domain).  You can also use them to help identify relevant examples and case studies.  Finally, you can use the model as a form of cognitive feedback, allowing the learner to compare his work with a given model.

Intuitive mental models–those homegrown structures that novices may bring to a new field–can be especially resistant to change.  So it might be worth investigating whether that’s true of novices in the field you’re dealing with.  You may need to begin with assumptions in those naive models and gradually work on elaborating new information.

The Ten Steps sees a reciprocal relationship between these two types of supportive information.  The main difference is in how they’re used.  Cognitive strategies focus more on the task performer’s actions, which mental models focus more on the domain itself.  going back to the map analogy I used earlier, you can use the map to plan a route from A to B (the cognitive strategy), and you can use the same map to understand the layout of a geographic area (the mental model).

One thought on “Step 6: (thinking about) mental models”